The cougar is most feared cat in North America and is one of just a few worldwide animals that hunt with such a sly prowess. Vancouver Island’s cougar, Felis concolor vancouverensis, is a subspecies of the mountain lion Felis concolor found in both North and South America. There are an estimated 4000 cougars that live in BC and an estimated 600-800 live on Vancouver Island making it the highest concentration for this mountain lion in North America. The highest concentration of cougars are on the north eastern part of the island where their is also a higher concentration of blacktail deer, the favourite meal for this sly cat. Like Blacktail deer, they prefer the mountainous forested regions. Its reddish brown coat is slightly darker than the mainland species.

Speed and Strength
Cougars have the largest hind legs proportionate to any others in the cat family. They can jump horizontally from 6 to 12 meters (20-40 ft) and run as fast as 70 km/hr (45 mi/hr). They are best adapted for short powerful chases though and are skilled climbers and forest navigators. It is most often an ambush predator. Female cougars are fiercely protective of their young have been seen fighting off Grizzly bears on the mainland.

Feed
Cougars are territorial often staying an area of 30 to 100 square miles. They prefer to hunt blacktail deer and will follow them to lower elevation during winter months. They will eat any of the smaller animals that come through their territory. Cougars will also swim to smaller islands temporarily to hunt if their territory is not producing for a time.

Mating and birth cycle
Cougars are solitary cats and are not usually seen together unless it is a mother with her young. There is no fixed mating season but most births happen during February and March. Females usually reproduce every other year and give birth to 2-3 kittens after a gestation period of around 90 days. Females preferably give birth in rock shelters or caves. Kittens weigh from about .24 kilos (.5 lbs) to .5 kilos (1 lb) and will stay with the mother up to 2 years. After separating siblings can remain together for another 2-3 months. Females remain productive until the age of 12 and males until the age of 20. Most cougars live 8-12 years in the wild though like Black Bears can live much longer in captivity.

Sightings and Hunting
Sightings are rare but may happen when a cougar is hunting domesticated animals or blacktail deer that are in populous areas. Many residents will never see a cougar during their lifetime since these large cats usually stay away from civilization. Because cougar populations on Vancouver Island are very healthy, tags are given to hunters who prize this cat as one of the top trophy animals. 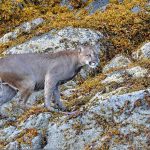 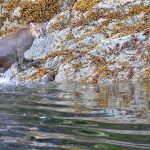 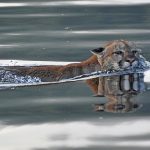 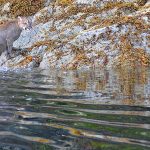 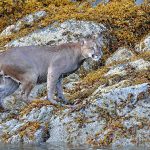