Humpbacks are the largest whale to frequent Vancouver Island waters. Humpbacks live in all major oceans and are migratory, spending summers in cooler feed rich waters and mating and calving in warmer tropical and subtropical waters. The only exception is the Arabian Sea where they live year round. Most of the humpback whales feeding in northern British Columbia during summer months winter in Hawaii. The Humpback Whales in southern BC have been re-sighted off both Mexico and Hawaii.

The Humpbacks spectacular breaches and tail slapping are an incredible sight. But even more than this display of power and size, Humpback whales are known for their song.

The Humpback Song
The Humpback song often lasts from 10 to 20 minutes with several sounds in a low vocal register and changing in frequency and amplitude. Humpback whales generate their songs by forcing air through their massive nasal cavities since they don’t have vocal cords. Both male and female humpback whales vocalize but it is the males that sing the loud, long and complex songs for which Humpbacks are famous. In Hawaii during mating season, Humpbacks males have been heard singing continuously for more than 24 hours, often with other males joining in on the song. In BC whales are not typically vocal for long periods of time, but they do seem to communicate back and forth while feeding.

For a long time researchers thought that only sexually mature humpbacks sing, but we now know that immature males join in singing to learn the music and amplify the song. Why other males join in the song is unknown but we do know that females don’t join in the songs and don’t sing like the males do. Males have been recorded singing before heading back to their wintering grounds though not with the same kind of participation from other males.

Feeding
During the summer months in British Columbia, humpback whales spend most of their time feeding on tiny crustaceans which consist mostly of krill but also plankton and small fish including herring and needlefish. On the underside of the Humpback’s mouth are from 12-35 ventral grooves which can expand when filtering water during feeding. Humpbacks need to build up their fat supply for the winter months and consume up to 2 tonnes a day. They have a few feeding techniques to school herring and other small fish in to a ball while feeding.

One of their more complex feeding methods is called bubble netting and involves a ring leader and a few helpers. One whale makes a very loud call below the feed. In order to escape the pressure and noise the bait are driven upwards. Another whale emits bubbles in a spiral containing the fish closer to the surface. All the whales then drive through the middle of the bait filling their large filters with confused and scared bait fish. Researchers have found there to be a small percentage of humpbacks exhibiting this behavior. Also, since herring is not the humpback’s primary feed, it is not a common sight in the wild but one that is fascinating scientists and anyone fortunate enough to witness this magical display of nature. Click below to watch this feeding caught on a hydrophone and camera in northern British Columbia: https://www.youtube.com/watch?v=nIUm2i3nZc8

Description
Humpbacks range from 22,000 to 36,000 kg (50,000 to 80,000 lbs) and are mostly dark grey to black with white markings. They can be identified easily by their noticeable hump, stocky body and the 270 to 400 darkly colored baleen plates on each side of their mouths. Knobs called tubercles (hair follicles) cover their head and lower jaw. The variation of patterns on the underside of their fluked tail is used to identify, name and track them. Scientists have yet to fully explain the humpback’s pectoral fins, which are proportionally the longest fins of any large marine animal. They often wave and slap the fins on the water while feeding and can be up to 4.6 meters (15 feet). Humpback whales can dive dive to depths up to 150-210 meters (500-700 feet) for up to 30 minutes, but usually dive less than 15 minutes doing dives at more shallow depths. Just before the humpback whale “sounds it often displays its tail, throwing its flukes upward and exposing the black and white patterned underside.

Mating/Reproduction
Most of the whales from British Columbia head to Hawaii with a few heading to Mexico for winter months where they breed and rest, and rely on fat reserves from summer months. Females typically breed every two to three years and here males compete for females that are ready to mate. The gestation period is almost a year. The calf is usually about 6 meters (20 feet) and and gets nursed for about 6 months on milk that is about 50% fat and pink in color. From there the mother starts encouraging independent feeding and the calf should be weaned at about 1 years of age. Females reach sexually maturity around 5 and males around 7 years of age. 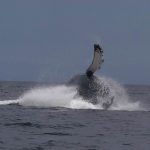 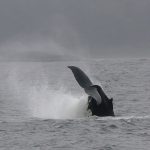 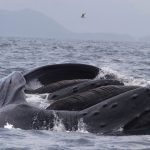 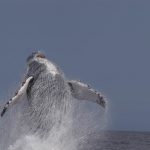