A colorful culinary culture from field to table, abundant slow food restaurants, pubs, breweries, all these only enrich Courtenay food culture. More than 500 local farms, a shellfish industry in the area support everything from kitchens to bistros and restaurants. After enjoying Courtenay’s lovely cuisine, finding rest and relaxation at one of the great spas in the area is recommended. Culture thrives in the art galleries as well in the Courtenay & District Museum & Paleontology Centre. Courtenay is Comox Valley’s centre for culture and commerce; it is indeed a wonderful place you won’t want to miss.

Location: Travel north on the Highway 19. Courtenay is about two hours and 220km from Victoria, about an hour and fifteen minutes, 110 km from Nanaimo.

Courtenay/Comox are close to Strathcona Park, which makes plenty of hiking and biking routes available. Boston Ridge Trail, a good 13-km circle day hike that goes up and over Boston Ridge and up to Mount Becher, which offers some amazing views. Cumberland Forest trail can be experienced by foot, and is a tranquil experience.

Biking is a great way to get around Comox Valley, especially because there are many mountain biking trails. Many trails revolve around Puntledge River and Common Lake, offering bikers a great view. At the dam on Comox Lake you can find nine moderate-to-difficult trails, known together as Comox Lake-Puntledge River Trails. Most of the trails here are hard-core singletrack.
On the west side of the dam at the mouth of Comox Lake you can find a parking lot. Trails begin just west of the dam, just ride west on the gravel road and take the first road B21 north. About 15 minutes uphill you can find a trail that leads you off the right. This is called Puntledge Plunge—if the name sounds enigmatic, don’t worry, you’ll figure out why it is called this in the first seconds of a near-vertical descent. Overall, you can find trails available for all levels of riders.

A BC Wildlife Watch viewing site where Steller and California sea lions, seals, and migratory birds hang out on the sunny stretch of coastline. During spring, sea lions are very active as they arrive from the annual herring and eulachon migration. Trails start from the north end of the road; they lead through a forested ravine to a staircase that descends to the stretch of sandy beach. Comox Native Band called it Xwee Xwhy Lug, a place with an atmosphere or serenity.

Bring the kids to cool off in a summer day at Lewis Centre waterpark and outdoor pool, or take a swim in Courtenay River.

Discovery the history of the area by visiting the District Museum and Palaeontology Centre that is located in the heart of the Courtenay’s downtown. Aboriginal and prehistoric history and pioneer artifacts can be found in these places.

Puntledge River Fish Hatchery offers some important lessons about the life of a salmon. The hatchery is also popular for summer tubing and year round paddling.

Stotan Falls and Nymph Falls are excellent locations for both picnicking and swimming. Wander with locals near downtown along the Rotary Riverside Trail and the connected Courtenay Riverway Heritage Walk for a beautiful sighting of bad eagle and blue heron.

Some golf courses include the Comox Golf Course, which is a challenging nine-hole course in the heart of downtown Comox, and Crown Isle gold Club in Courtenay.

Comox Valley Art Gallery and I-Hos Native Gallery are some very good places to visit for the art enthusiasts. In addition, many cafes do hang the work of local artists.

Ferry to the Mainland

There are ferry sailings available from Little River Ferry Terminal in Comox. It links central Vancouver Island with Powell River on the northern Sunshine Coast.

Elevate the Arts festival in early June and Art of Bloom festival at Kitty Coleman Woodland Garden in May are just two diverse and popular art festivals. In August, don’t miss the famous Filberg Festival and Nautical Day – they showcase the best artistic work of the area including arts, crafts, music and fireworks. In August, the Comox Valley Exhibition is held annually and it celebrates the areas exclusive and unique agricultural history. The exhibition is great for families, and it hosts many activities for kids. Vancouver Island Music Fest is a favorite among the Comox Valley community, as it brings diverse and renowned musicians from all over the world. It is held every year in mid July. Every year, in the middle of August held at Comox Air Show you can watch the popular “Snow Birds” take fight at the 19 Wing Air Base. The trails begin just west of the dam.

The weeklong event is held annually in February. By participating, you will discover why 2.000 Trumpeter Swans spend their winter in the Comox Valley. The trumpeter swans come in low over over the treetops, two, three at a time. With a 2.5m wingspan, the world’s largest waterfowl shows off its  aerodynamic abilities. The best bush pilot would burn with envy when they would see how the swans mimic the landing gear of a plane, and pairs of wide, webbed feet drop down to break their fall.  Just after landing, the new arrivals fold their wings, arch their necks and drift off regally to join the other swans.

This is not a rare sighting. This scene is repeated more than twice daily on ponds and lakes throughout Comox Valley. The number of trumpeter swans have continued to increase after a dismal low of several hundredths in 1960 to more than 10,000 today. Comox Valley farmers tend to feed the swans in the winter; this may have a good impact as more than a thousand of them remain in Comox valley and forming  the largest colony on the west coast of North America. The smaller flocks migrate to the Lower Mainland, the others fly south, as far as Oregon. You will see many signs around the valley encouraging the visitors to participate in the Trumpeter Swan Management Area.

There are a plethora of trumpeter swan viewing sites around the valley. Some famous ones are the well-marked scenic route on Comox Road between Courtenay and Comox. This route is both suited for driving as well as cycling. As for shoreline sites, there are Kin Beach, Singing Sands, Point Holmes and Cape Lazo. If you need more information on trumpeter swans, you can always contact the Comox-Strathcona Natural History Society.

After a day of riding slopes at Mt. Washington Ski Resort, located at 31 km west on Hwi 19, you will find that Courtenay has a great après-ski environment. Mouth Washington (1590m/5,216 feet elevation) is knowing for having excellent snow conditions from early spring to well past Easter. The depth of snow on this mountain is often deeper than anywhere in British Columbia and occasionally, anywhere in the world. A year record for this mountain was in 1955, when it had more snow than any sky resort in the world. As you can imagine, Mount Washington is very popular, being the second busiest winter recreation destination in BC, only behind Whistler Blackcomb Ski Resort. In addition to this, excellent hiking conditions can be found on Mt Washington.

Comox Valley’s original settles were K’omoks First Nation; they occupied Comox thousands of years ago. Comox has fertile lands and an excellent natural harbor, which were commodities shared by the first European settlers that arrived in 1862. Comox Glacier is an abundant source of fresh water and fish, and the seemingly endless forest lands have been shared by aboriginal people and even immigrants from all over ever since. Two factors have helped the culture to thrive in Comox Valley: rich agriculture and strong farming. Moreover, the favorable temperature climate has attracted a retirement community.

Comox is a great stop for golfers, as it offers the world-renowned greens and fairways of the Crown Isle Resort and Golf Community. For the avid traveling golfers, it also offers the Glacier Greens Golf Course.

Comox largest employer is the Canadian Forces Based Comox, which was established in 1942 because of the area’s unique and strategic position on the Canadian west coast. The Comox Air Force Museum commemorates west coast aviation and has a showcase of many vintage aircrafts, including the famous Y2K restored Spitfire. Comox International Airport provides a variety of routes to many International cities, including direct flights to Calgary and Edmonton, Hawaii, Mexico.

Shops, galleries, restaurants, pubs and spas can be found in Downtown Comox, as well as a full service Marina and adjoining its Fisherman’s Wharf.

Comox’s events include the four-day Filberg Festival at the Filberg Heritage Lodge and Park featuring 120 of the best Canadian artisans. 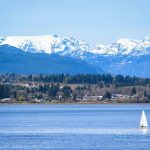 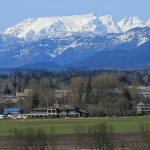