River Otters on Vancouver Island
The North American River Otter (Lontra Canadensis) can be found in many places around Vancouver Island. You may see them in spots like Esquimalt Harbour and Lagoon, Telegraph Cove, Tofino and Ucluelet harbours, Jack Point in Nanaimo or anywhere there is a dock, estuary, or river. River otters are often confused with Sea Otters since they frequent salt as well as fresh water.

Here are the many ways you can tell them apart:

Taxonomy
Aquatic life is the perfect environment for the river otter to live. It small head is the same size as its neck and its ears are tucked in to its head making it very streamlined. The nostrils and ears close during submersion keeping water from entering them. River otters have a transparent nicitating membrane to protect their eyes when underwater. (A nicitating membrane is a transparent or translucent third eyelid that can be drawn across the eye for protection or to moisten it while maintaining visibility). Its whiskers are long and thick, enhancing sensory perception underwater and on land. Its smell and hearing abilities are very good but its vision is near sighted, so it may approach a boat or dock before figuring out there are there.

The river otter’s short and powerful legs and webbed toes help it swim quite well considering it moves in a doggy paddle. The right lung is about 20% larger than the left with four lobes compared to the left’s two. The delicate sense of touch in the paws help it out in having good dexterity. A river otter has large hard molars the use to crush the shells of mollusks and other hard objects. An adult river otter has a total of 36 teeth.

Reproduction and Life Cycle
Males and female river otters usually become sexually mature at two years and typically breed from December to April. The male initiates breeding by grabbing the female with his teeth followed by vigorous copulation lasting up to 75 minutes. Females usually birth two to five kits, residing in dens found in hollow logs or burrows dug by other animals. It takes a kit about three weeks before their eye open. When their coat has grown in at around two months of age, the kit gets introduced to water. The mother teaches the kits for about 6 months how to swim and forage until they can survive on their own. It is possible for the kits to leave as early as 8 weeks of age.

When the pups are about two months old and their coats grow in, their mother introduces them to the water. Otters are natural swimmers and, with parental supervision, they acquire the skills necessary to swim.[12] The otters may leave the den by eight weeks and are capable of sustaining themselves upon the arrival of fall, but they usually stay with their families, which sometimes include the father, until the following spring.

Sightings and Social Behavior
River otters are often seen traveling in groups. They are somewhat nocturnal so you may just see evidence of their presence from the night before. It is fairly common to see them in family groups, though not necessarily with both the father and mother present at the same time. River otters are territorial, so if present in one area they will likely stay there during their lifetime. Large groups of rivers otters are called rafts. 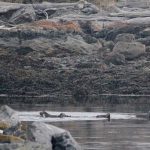 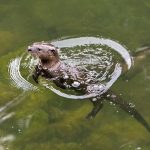 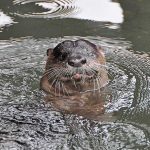 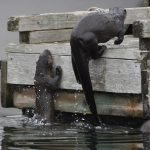