Grizzly bears do not live year round on Vancouver Island however you can go on one of the bear watching trips to view the mainland Grizzlies. There are almost 14000 Grizzly Bears in British Columbia and many coastal Grizzlies feed along the shorelines for shellfish as well as during salmon season. There have been a few cases of Grizzlies swimming to Vancouver Island, though it is rare.

Description
The North American Grizzly Bear (Ursus arctos horribilis) is a sub species of the Brown Bear found in other parts of the world. Most North American Grizzlies look the same. Coming from hibernation Grizzly Bear weights average around 220 kg (480 lb.) for males and 130 kg (290 lb.) for females. They will weigh about 30 to 40 percent more just before hibernation. They have long, slender yellow or brown claws and a prominent shoulder hump probably formed by digging along the shore.

In coastal regions of British Columbia most Grizzlies are light brown to dark brown. Grizzlies usually walk slowly, swinging their head from side to side. But Grizzlies are also fast, sometimes as fast as 55 km per hour, and even on steep slopes. They are also excellent swimmers which is why they can reach Vancouver Island or other closer islands. When Grizzlies are alerted to danger they will stand upright on their hind legs to get a better view of what is around. Grizzlies are not social and the only bears staying together are sows with their young.

Mating/Life cycle
Mating happens during a six- or seven-week period from late May to early July, but most pairs bond only a few days during that time. Grizzly Bears are polygamous, and males and females have been seen mating with more than one partner on the same day. Littermates therefore will sometimes have different fathers. Delayed implantation of the uterus takes place and the embryo starts development in hibernation during November. The hairless cubs weighing about .5 kg are born in January or February and are nursed until the bears leave the den in late April or May. The cubs usually stay with the mother for about 2 years. Grizzlies can live more than 30 years in the wild.

Hibernation
Grizzly Bears usually hibernate from November to April in British Columbia’s coastal regions. Grizzly bears’s rate drops to 8 to 12 beats per minute and he bear’s body temperature drops as low as 4 degrees celcius. It uses only about 50% of the oxygen and does not urinate or defecate.

Grizzlies are particular about where their dens are, though they don’t have to be large. Dens are often less than 4 meters long with an entrance about .7 meters in diameter. The chamber is just big enough to crawl in an turn around. Some coastal Grizzlies will use hollow trees as their winter den. Bears will sometime dig more than one before being satisfied and occasionally move to a new one during winter months. Bear dens are often close together and most of the time bears pick steep slopes as the entrance to their den as this provides water run off and allows the snow to build up in the front of the cave for wind protection.

Feed
Grizzly bears are classified as carnivores but are really omnivores. Coastal Grizzlies mostly feed on sedges, skunk cabbage, horetail, and other grasses during the spring months and then switch to salmon berries, black raspberries, red elder and spawning salmon in the fall. Bears will also feed on the beaches looking for crustaceans and shellfish and can be seen overturning rocks in their search. Grizzly bears use their sense of smell to hunt for young deer and elk calves since they don’t have great eyesight, though it is good enough to see other bears and what they are eating. 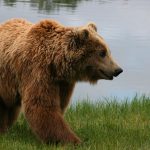 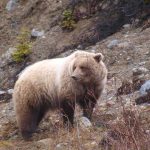 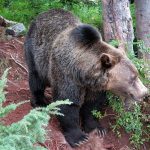 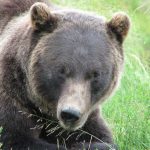 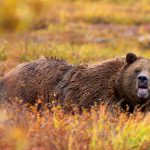 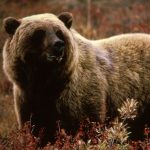 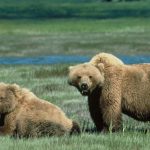 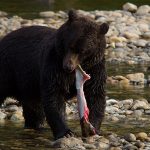 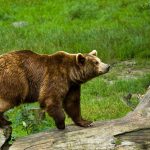 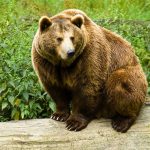 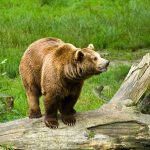 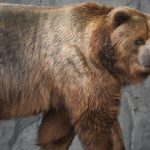 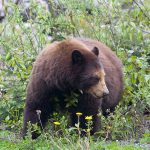 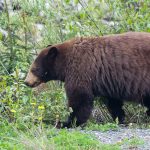 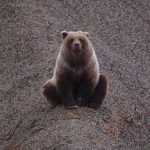 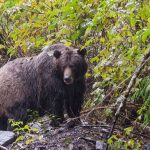 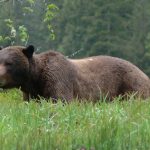 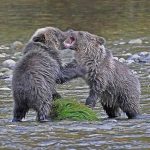 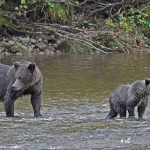 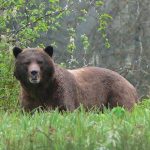 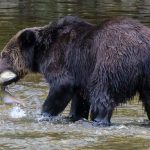 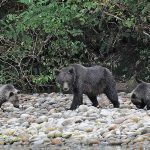 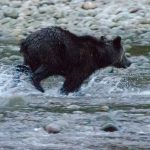