Migration/Mating
From May to August most males have returned to the rookeries in California to mate. Females will gather in groups before the mating begins and will mount each other along with males. There is a 12-month reproductive cycle which includes 3 month period for the egg to get fertilized and a 9 month gestation period. Mothers will stay with the pups for the first 10 days before going to hunt for food.

Numbers of pups being born every year have been steadily increasing since the 1970s to a possible over population. Around 65,000 pups are born yearly along the coast and most stay in nurseries until they are able to go hunting with the mother.

Feeding
Prey for the California sea lion includes salmon, hake, herring, pilchards, anchovies, squid, small sharks, and rock fish. Their hunting trips at sea can last two weeks and they can dive up to 274 meters (900 ft), though shallower dives are more common. They will sometimes feed around dolphins, porpoises, and even birds while attacking the bait fish. About 35% of their diet is herring and they consume about 3000 tonnes annually around Vancouver Island. Salmon make up about 10% of their diet though for some salmon make a great percentage. At least 600 tonnes are taken annually. Sea lions have become a nuisance to herring and salmon fisherman as well as around salmon and trout hatcheries and river mouths. One sea lion can eat 10,000 salmon fry in a night’s feeding. DFO in Canada has spent large amounts of money and time trying to deter them from entering the rivers without much success. 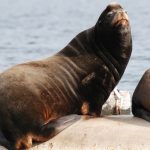 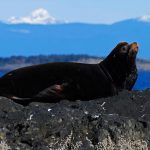 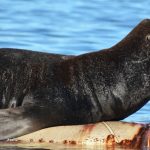 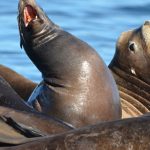 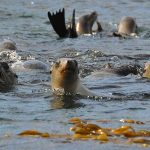 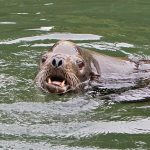 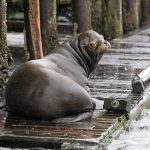 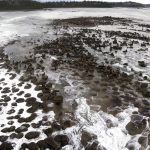 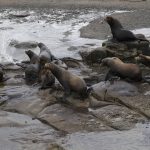 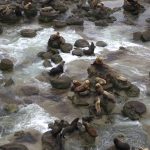 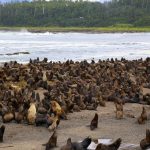