Description
The Vancouver Island wolf is very similar in size and appearance to its relative, the grey wolf. Weighing between 20 and 60 kg (male, females smaller), the Vancouver Island wolf is generally considered to be lighter in colour overall than the mainland species, with some animals appearing almost completely white. These animals prey mainly on black-tailed deer and Roosevelt elk, only taking smaller game, such as squirrels, rodents, and beaver, when larger prey are scarce. Another hallmark of the Vancouver Island subspecies is their higher living density, up to 14 animals per km2.

Vancouver Island Range
Wolves are top level predators, typically requiring large ranges in order to find a sufficient amount of food. Living on Vancouver Island affords the wolf the ability to live in smaller ranges than usual, and at high densities, due to the abundance of deer. However, these animals still require a large area, as the packs are territorial, and can draw down local populations of prey if forced to remain in one place for too long.

Their distribution on Vancouver Island is restricted to forested and semi-forested areas. Once living up and down both coasts of the island, the wolves are currently most prevalent in the uninhabited northern coastal portions of the island, and as well on the west coast, as far south as Port Renfrew. Sightings occur occasionally on the coasts of Vargas Island and Meares Island in Clayoquot sound, as well as infrequently in Cape Scott Provincial Park.

Habitat
Its original habitat extended from the Northern Rocky Mountains to Southern Alberta in Canada.

Characteristics
The Vancouver Island wolf is of medium sized, measuring roughly 26 to 32 inches high, 4 to 5 feet from nose to end of tail, and weighing 65 to 90 pounds. It is usually a mix of grey, brown, and black. Occasionally, they are seen pure white.

Diet
The two principal prey of the Vancouver Island wolf are the Columbian black-tailed deer and the Roosevelt elk. It also feeds on Eastern Cottontail Rabbit which were brought to the island in 1964.

Breeding
Breeding season for this wolf comes in January. 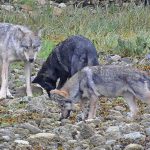 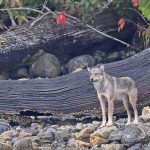 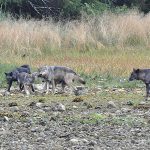 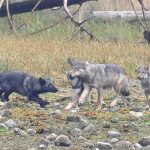 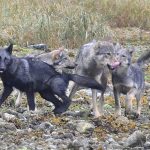 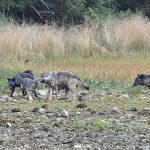 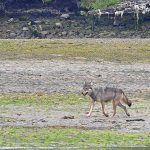