Steller sea lions are the largest of the 5 species of sea lion and are the fourth largest pinniped in the world behind the northern elephant seal, southern elephant seal, and walrus. They can be found from California up to Alaska, however it is much more abundant in British Columbia and Alaska. Steller sea lions are the most common sea lion on Vancouver Island and numbers are estimated close to 25,000 in British Columbia. They can be seen on all areas on Vancouver Island though you will most likely see them from a boat since they seem to hang out on isolated rocks and small islands.

Body features/swimming
Coloration on Stellers range from light blonde to reddish brown with slightly darker colors on its chest. Unlike other pinnipeds the light colors don’t change when the fur is wet. The flippers are black along with other hairless parts on the body. The front flippers are longer and wider than the rear and provide the primary propulsion.

Feeding
Being very opportunistic feeders, Steller sea lions take advantage of sleeping fish at night meaning they don’t have to work too hard for their catch. In British Columbia they feed on herring, salmon, sand lance, pilchards, hake, cephalopods, rock fish and dogfish (small sharks). Steller sea lions can feed alone or in groups of up to 100 if feeding on schooling fish. They can dive up over 300 meters and staying submerged for up to 8 minutes. Daily food requirement is about 15-20 kg for mature females, and 30-35 kg for mature males and about 7% of body weight.

Reproduction/Life Cycle
Steller sea lions are colonial breeders where adult males establish and defend territories to mate with females and create rookeries. Bulls (adult males) become sexually mature from 3 and 8 years of age but they can usually only hold a territory successfully until 9 or 10 years old when they are large enough. Bulls aggressively defend their territory and can go without eating for 1-2 months to do this. Females usually mate at 4 to 6 years of age and will most likely birth one pup each year. Pups are about 1 meter in length and weigh 16-22.5 kg (35-50 pounds) at birth. Females typically within 2 weeks after giving birth. Males typically live up to 14 years and females up to 22 years.

Population Trends
Based on genetic analyses, areas of reproduction and local feeding areas, the global Steller sea lion population has been divided into an eastern and western stock at 144°W longitude running through the middle of the Gulf of Alaska. The eastern stock goes to Russia and Japan, while the western stock is from California to Alaska. The eastern stock was in decline up until 2000 and used to be 80% of the total stock. Now with increasing western sea lions up to 5% per year, the western and eastern stocks are almost the same, though the eastern stock is increasing again as well. Stellers in BC have been increasing up to 5% per year since the 1970’s and have caused concern for their role in the ecosystem and the amount of food they consume. 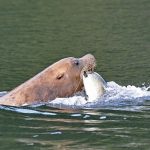 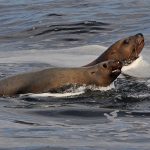 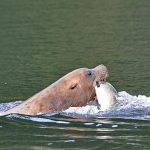 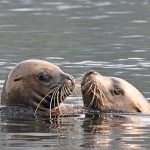 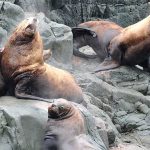