There are about 5000 Sea otters in British Columbia, mostly seen in sea kelp beds from a boat. The sea otter is the heaviest in the Mustelidae family including 13 otters, among them the giant otter. The river otter is often confused with the sea otter, so we have a chart below that will help you easily distinguish them.

Taxonomy
The sea otter is very different from the other otters since it spends the majority of its time in salt water and is perfectly content to float around the kelp beds. A sea otter has underfur and the guard hair, the finest of any mammal, consisting of 800,000 to 1 million hairs per square inch. These hair fibers connect to trap air between them. Sea otters depend on these hairs to keep them warm while in the water and maintain their body heat without the blubber other sea mammals use. If a sea otter’s fur ever gets covered in oil or any other natural food or oil related substances, it will loose the ability to keep itself insulated. Therefore, sea otters spend a good part of their day cleaning and grooming their fur.

Food and Drink
With a metabolic rate 2-3 times that of other terrestrial animals in the same weight class, the sea otter has to eat about a quarter to a third of its body weight daily. The cold water means that warm blooded animals have to make up for the heat loss. The sea otter is known for the rebirth of kelp beds since it reintroduction to the west coast in the early 70’s. It eats the kelp killing urchins giving cover to many types of fish. Most of the water needed comes through what it eats, but it does have a large kidneys so that drinking salt water is no problem.

Reproduction and Life Cycle
Sea otters are polygynous with mating happening for a few days in the water. Births happen in the water all year with most around Vancouver Island giving birth from January to March. Pups are typically born with eyes open and a litte set of baby teeth weighing 1.4 to 2.3 kg (3-5lbs). When twins are born, usually only one pup survives. Mother sea otters are very devoted to caring for their pups with constant attention given unless a necessary task like foraging is done. Pup mortality rate is very high and mothers have been seen carrying their dead pups for days after their death. The more experienced a mother is, the better chance the pups have in surviving. Pups can’t swim well in the first few weeks of life and stay afloat with their air tight fur coats. Males live up to 15 years in the wild and femailes up to 20.

Social Behavior
Males and Females usually stay in separate groups unless mating. Sea otters are usually seen in small groups though they can be seen in groups called rafts up to a 100 strong. Unlike river otters, they are mostly active during the daytime. They are also not as territorial as river otters, however they often stick close to where they were born. 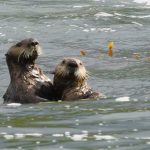 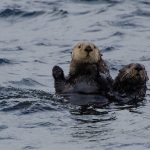 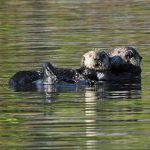 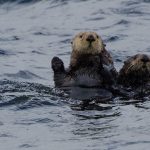 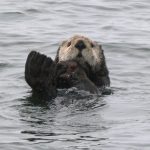 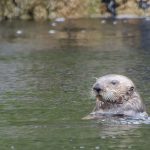 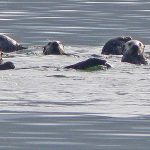 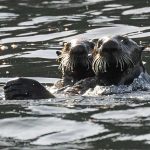 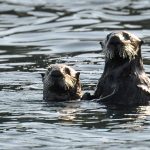 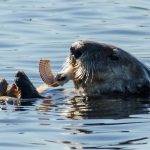