It is estimated that there are more than 120,000 Black Bears in British Columbia and over 7000 Black Bears on Vancouver Island making it one of the more dense places in the world for this bear population. The Vancouver Island black bear is slightly darker in colour and larger than the mainland bear and is considered one of 6 subspecies in British Columbia. Skeletal remains on Vancouver Island have been dated up to 10,000 years indicating the black bear has been kept mostly separate from its mainland brothers for a long time.

Reproduction
In comparison to many mammals black bears have a low reproductive rate. This may improve in areas with rich food sources such as fish. Males usually don’t start breeding until five or six years except in rare occasions where they can start as early as one and a half years. Females usually reach maturity starting at four years and then breed every two to three years. It is most common to have two offspring but that number can
vary from one to five. Black Bears on Vancouver Island usually come out of hibernation by March and quite visible by April. Mating usually happens from early June to mid July. There is a strange phenomenon called delayed implantation where the embryo does not implant into the uterus to begin developing until late fall. Cubs are born during hibernation in January or February. During hibernation the mother will nurse these tiny blind hairless babies weighing about half a kilo (1lb).

By the time the little family leaves hibernation, the cubs will weigh between three to five kilos. They stay with the mother the first year while learning survival in protection. The mother usually avoids walking through open areas when moving her range. The cubs usually spend their first winter with the mother before she kicks them out again. Males will most likely go to a new range.

Food
Black Bears are omnivorous even though they are classified as carnivores. Most of their diet consists of vegetation though coastal bears will often eat sea life, overturning rocks to get their prey. Bears will also kill young deer though have been reported to hunt mature elk as well. During the fall Black bears can be spotted in lower elevation close to rivers and streams or in berry patches around clearcuts and open areas.

Conservation
Black Bear populations are very healthy on Vancouver Island and the rest of British Columbia. Conflicts with humans arise when bears start becoming dependent on garbage, fruit of trees, beehives and campers food. Up to 1000 bears are killed by conservation officers in BC because bears become too much of nuisance around populated areas. With increasing residential areas in British Columbia the bears habitat is being decreased. When traveling please make sure you keep your food out of the bear’s reach.

Bear Safety Tips
Like most animals in the wild, black bears are afraid of humans. Attacks are very rare but could happen in situations where

Guidelines while hiking or camping

If you come into close proximity to a bear and it does not run off, remain facing the bear and let it know you are a human and not prey by talking to it. Also, try to avoid direct eye contact. If is comes toward you and is within 25 feet, discharge bear spray since the bear has a sensitive nose. In the case of an attack you should determine if the attack is defensive or predatory. A defensive attack can be triggered if you are too close to the bear’s young, its food source, or it is startled. Predatory attacks are very rare but could happen when the bear is foraging for food. 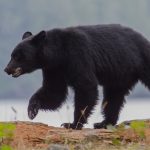 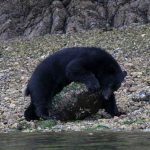 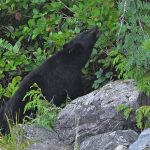 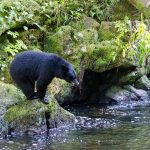 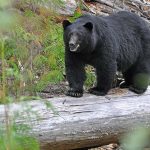 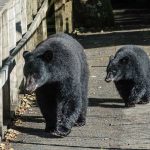 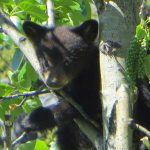 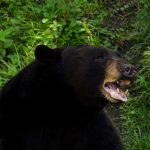 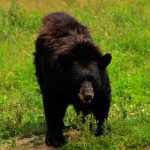