Nicknamed Flo by locals, Florencia Bay is surrounded by cliffs making a spectacular backdrop to the 6km beach. It is also common to see surfers and paddle boarders here. This beach was originally named, “Wreck Bay” because of a 200-tonne brigantine named Florencia capsized further north off Vancouver Island in 1860. It was determined the ship was repairable and was being towed back to Victoria when the  towing ship experienced engine trouble and had to let the Florencia go free. Shortly after,  a storm blew in the Florencia on the shores of this bay.

Florencia Bay is one of the more quiet beaches and you will mostly see surfers, kayers, boogie boarders and paddle boarders. It is possible to see seals and sea lions while surfing so don’t be too surprised. Florencia Bay can be a fishing hotspot as well, so you may see boats out near the island at the north end of the bay.

The trail stretches along the tree above the beach or you can walk down on the to beach via a long stairway. 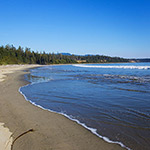 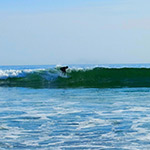 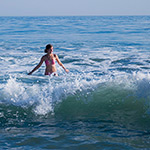 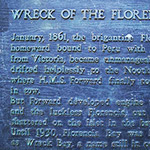 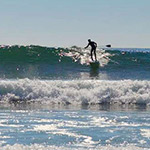 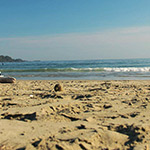 Turn on Wickaninnish Road  (about 12 mins from Ucluelet and 23 mins fromTofino) and travel towards the resort. On your left look for the sign indicating the parking lot for Florencia Bay Beach.