The Pink-footed Shearwater is the largest of the shearwaters seen off the Pacific Coast and it may be solitary or with other types of birds.  It usually nests in South America and then migrates north along the coast of the US and Canada during the summer months. It is a polymorphic bird and you will see both dark and lighter colored birds.

The Sooty Shearwater is one of most common birds offshore from the west coast of Vancouver Island and is often mistaken for a gull. Besides appearance it has very little in common. It likes the cold offshore water and will also hangout where the cold and warmer waters meet. It does little dives and dips as it flies along twisting and turning to and fro as it goes while keeping an eye out for food. It breeds mostly in the southern hemisphere. In Australia and New Zealand the Sooty can be someone’s meal, but on the west coast of North America they are protected. 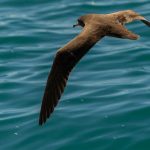 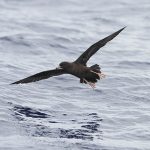 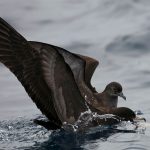 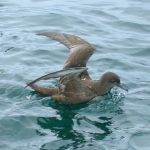 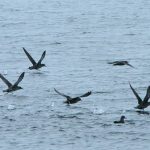 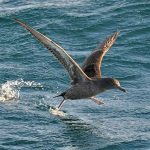