A bird that if found all over North America mostly on fields, river banks and mudflats. The Killdeer is famous for its broken wing act where it tries to lure you away from its nest. Their nest is not usually very sophisticated and is often out in the open. They rely on their distraction techniques to lure predators away.

This plover has one of the longest migratory routes for any bird, over 25,000 miles (40,000 km), tracing from Alaska to South America on a yearly basis. It is extremely fast for a shoreline bird and can typically be seen migrating South in the early fall. The population is still recovering as hunters in the 19th century absolutely decimated their numbers.

The Black Bellied Plover looks sharp in its summer plumage. Its black belly turns white during the winter season. Both males and females look quite similar, though males have more pronounced features.  They can be hard to identify in the field, the Black-bellied Plover is the only American plover with a hind toe on its foot. When approaching shorebirds they are usually the first birds to fly away, however they often land close by again. Sightings are more common in spring and fall seasons but some plovers hang around in winter months as well.  The Black Bellied Plover is known for its haunting whistle that can be heard at any time of the day.

The Semi-palmated Plover is the most common plover migrating through North America. It is frequently seen on sandy and gravel beaches, small estuaries and tidal mudflats. April and May are peak times for Semi-palmated plovers. There a few that stay over the summer and the rest start coming back over the island in July numbers increasing through August. By September they have started thinning out. The name comes from the partial webbing on the bird’s feet. 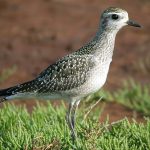 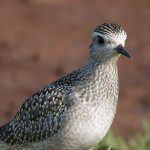 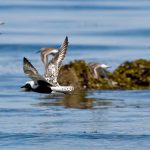 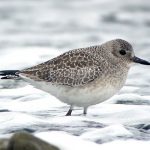 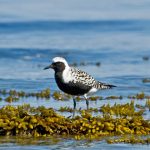 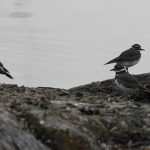 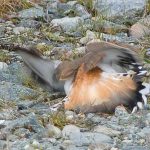 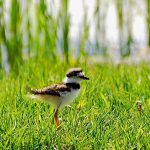 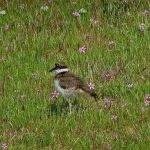 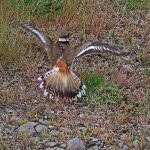 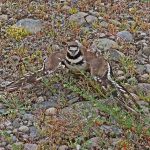 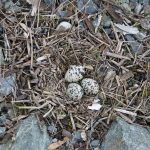 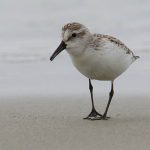 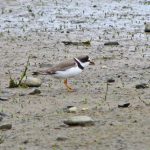 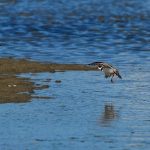 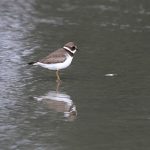