Ancient Murrelets, like all Murrelets, are diving birds and have short wings to propel them along underwater. They dive depths up to 20 meters feeding on small bait fish like Pacific Sand Lance. Normal body plumage is dark gray with a white throat and belly. Sexes are similar and juveniles are brown instead of black or dark gray like adults.

Marbled Murrelets are usually found within sheltered waters like Georgia Strait. They forage by diving using their wings to propel them along underwater. Since they need smaller wings to swim faster, they also have to fly faster to keep in flight and have difficulty landing and taking off. The sexes are similar both having a short neck and tail. Winter plumage sees the back darkening to black and the sides and belly becoming white.

Pigeon Guillemots (Cepphuscolumba) only occur in the northern Pacific, but are a close relative of the Black Guillemot (C.grylle) which only occurs in the north Atlantic. In 1678 John Ray published the first bird book in the English language (all earlier bird books had been in Latin). In this book, he referred to Black Guillemot as Greenland Doves or Sea Turtles (ie Turtle Doves). He commented that they were a similar size to pigeons, and that they laid two eggs like a pigeon. This is true, and it is unusual for auks to lay two eggs, most lay only one. Linnaeus scientifically named Black Guillemot as Alcagrylle in 1758, but it was 53 years later when Peter Pallas named the Pigeon Guillemot columba in 1811. Presumably he used the pigeon references to the very similar Black Guillemot when he named this species. These three in non-breeding plumage were photographed off Port MacNeill on Vancouver Island. (By Tim Melling)

The Tufted Puffin is not common sighting on Vancouver Island, Tofino is one of the spots to see one during summer months when the bird has its bright colors. It is a bit of sight to watch it try and take off from water as it thrashes along to become airborne. It is a diving bird and like Murrelets it propels itself through the water with its wings swimming through schools of baitfish. 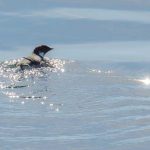 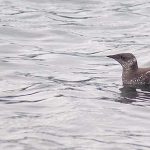 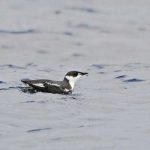 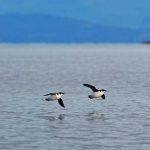 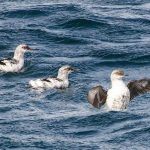 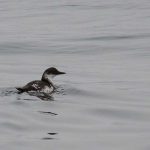 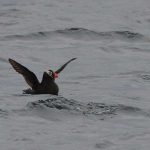 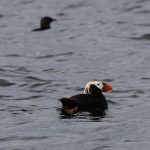