The California gull can be identified by the black wing tips with white spots. The black on the wing tips is more significant than other gulls. The bill and legs are yellow and it has a red and black dot on the beak. It feeds on garbage, mice,  worms and eggs from other birds, and dead fish. It breeds in the prairie provinces and states during summer months and then mostly spends the winters on the coast. It 1955 became the state bird of Utah.

The Heermann’s Gull is the only North American bird to have a sooty gray body and a white head. It will generally have a red bill with a black tip and black legs and feet. It does not get its full adult colors until about the fourth year. Since the early stage of life the Heermann’s Gull is mostly gray, the red bill helps identify it. It is the only North American Gull that lives as far north as Alaska and then breeds south of the United States. Almost all the breeding is done on the Isle of Rosa in Mexico.

The Herring Gull is one of the more common gulls and reaches across North America on waterways and in many places where there is garbage. The Herring gull has black wing tips like the California gull but is larger with pink legs and yellow eyes instead of yellow feet and dark eyes. It has a yellow bill with a red spot on the lower beak but thicker than the California Gull. The male is larger than the female and it feeds on fish, insects on marine invertebrates. When mating, females will approach males in a hunched posture.

The Glaucous-winged gull lives and breeds from Washington up to Alaska. It frequently breeds with its close relative, the western gull, and is close in size to the Herring gull. The longest recorded lifespan in British Columbia was 37 year, however like other gulls, its life span is usually about 15 years. 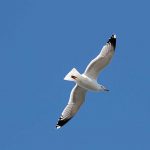 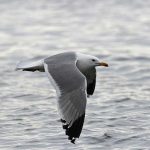 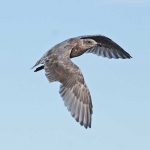 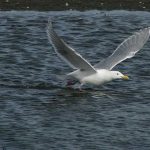 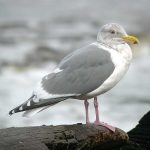 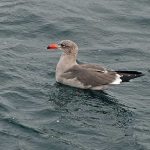 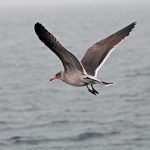 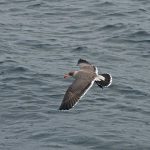 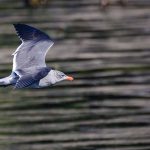 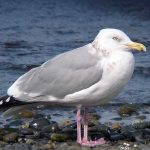 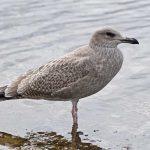 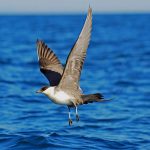 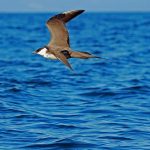 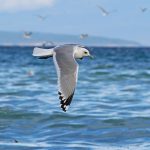 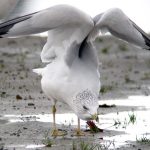 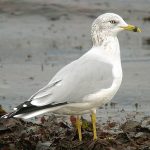 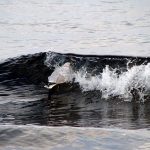 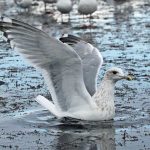 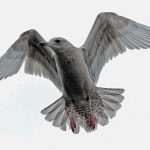 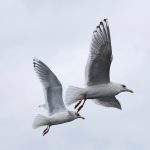 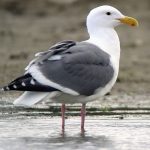 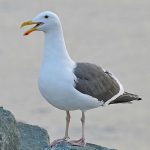 The Mew Gull looks similar to the California and Ring-billed gulls but is smaller and has more white covering the body. The Mew Gull is the smallest of the birds with white heads and black wingtips. Its yellow-green legs and feet can be identified with closer examination but will look like a dull yellow from a distance. The Mew Gull is the only white headed gull that can use trees for nesting and in Alaska and Noth-western Canada this is a common sight.

This Gull looks much like the Herring and California Gulls but is identified by the black ring around the bill. Unlike much of North America, this species isn’t terribly common on Vancouver Island but can be seen on both the east and west coast of the island.

The Western Gull is one of the most common gulls on the coast. It can be identified by its yellow eyes along with the red spot on its yellow bill and its pink legs. It can have a white edge on the front or rear its wings. Juvenile birds are gray with a black tip on the beak. The Western Gull often hybridizes with the Glaucous Winged gull.