The name Cormorant has its origins in the Latin words Corvus Marinus which means raven or marine crow, most likely because they rest on perches high above the water. Cormorants and shags are in a family of 40 species of aquatic birds called Phalacrocoracidae. No major distinction exists between cormorants and shags and they are considered large to medium seabirds. Cormorants exist in many coastal parts of the world including Vancouver Island, New Zealand, Australia, and the UK and are generally seen in large groups on Vancouver Island. Cormorants are fish eaters and will usually dive in the water using their feet and wings to propel themselves. They often look as if they are ready to take off at a moments notice, however they are mostly likely drying their wings off in the sun. Mitlenatch Island between Courtenay and Campbell River holds approx. 230 and Chrome and Gabriola Islands hold approx. 60 Pelagic and Double Crested Cormorants.

You can see Brandt’s Cormorants all year in few parts of the island. Like other cormorants, these like to perch on ledges of steep cliffs as well as other high areas. Brandt’s Cormorants will sometimes fly in a line numbering up to a hundred birds. Brandt’s Cormorants range from Alaska down to the Baja Peninsula and have numbers up above 200,000. They can dive up to 100 feet and feed on small fish and crabs.

The Farallon Cormorant is one of the 5 subspecies of the Double Crested Cormant and is the most common on Vancouver Island. The White-Crested Cormorant may also be seen here. The Double-Crested cormorant can dive up to 7.5 m (24 ft) and usually nest close to their feeding areas which can be along cliffs in porous rocks. Mitlenatch Island between Courtenay and Campbell River holds approx. 230 and Chrome and Gabriola Islands hold approx. 60 Pelagic and Double Crested Cormorants. 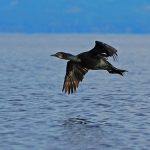 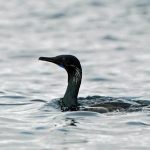 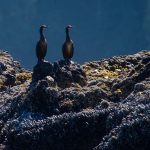 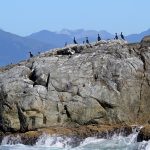 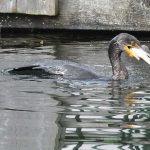 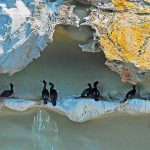 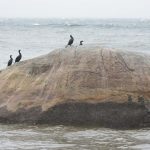