This species is recognized for its long needle like bill that is upturned at the end. This avocet also has distinguishable long, thin, gray legs which can hardly be mistaken. Flocks can be seen feeding together, usually leaning forward looking for small insects and crustaceans.

This eye popping and eye catching black bird can be found from Victoria to Campbell River on the east side of the island and also around Pacific Rim National Park year round.  It feeds on mussels, clams, limpets, worms and other shellfish. It does not feed on oyster around Vancouver Island. If you ever see one eating an oyster, please let us know and take pictures!

A year-round resident of Vancouver Island, they can be seen during low tide foraging for differing types of shellfish. Its territorial claim is from the Aleutian Islands in Alaska to the coast of the Baja California but typically is a permanent resident where it chooses to stay. The oystercatcher breeds for life and many pairs can be seen waddling around their breeding and nesting sites looking for food.

The Great Blue Heron can be found from Alaska down to the Baha along the west coast but the herons on Vancouver Island are considered their own subspecies. The largest of the herons in North America, these birds are isolated from migrating herons and have their own unique characteristics.

Herons on Vancouver Island feed on small crabs, shrimp, rodents, fish and small aquatic insects. Herons are usually solitary birds and are most vocal when mating. They often breed in colonies of about 100-500 birds in marches and wetlands. On Vancouver Island there are two colonies of around 50 birds on the northern part of Salt Spring Island and west of Duncan. There are a few other breeding areas from Quadra Island down to Victoria with much smaller numbers in the low-lying wetlands. There are probably about 250-300 herons in total on Vancouver Island. 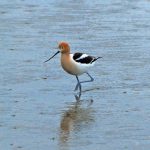 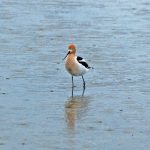 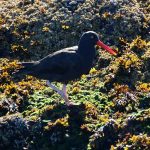 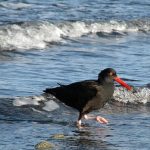 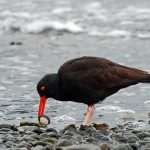 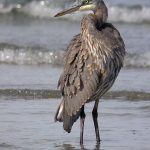 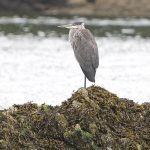 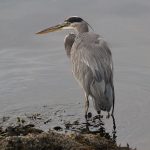 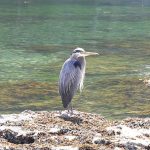 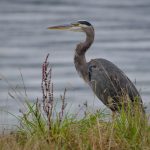